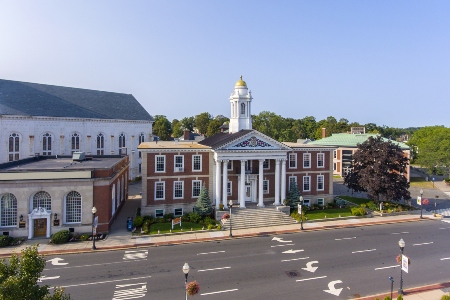 Situated approx 9 miles to the North West of Boston, Woburn is a small modern city with a long history. First settled in 1640, it is one of the oldest and most historic communities in New England. During the 1800s, the leather industry boomed in this area, and the High Schoolers are still known as the Tanners today. Modern Woburn is a mix of quiet residential neighborhoods, vibrant commercial areas, and conservation land. The town offers opportunities for work, play, and other activities for people of all ages.

Due to Woburn’s long history, there are examples of many different historical and architectural styles of housing. Colonial, cape, and ranch style single-family homes in neighborhoods such as Salem Street and North Woburn mix with new condo complexes such as Battle March Village and Shannon Farm in Shaker Hill, meaning you are sure to find what you are looking for.

Woburn has two commuter rail stations - Mishawum, a flag stop on the Lowell - North Station line, and Anderson / Woburn (Anderson Regional Transportation Center), which as well as being on the Lowell line is also a stop on the Amtrak Downeaster route between Boston and Brunswick Maine. The Logan Express, a bus service to Logan Airport, also departs from Anderson/ Woburn. There is also a bus service - 354 - that stops at several locations in Woburn before traveling express to State St in the heart of Boston’s Financial District, a great option for commuters.

One of the most significant historical buildings is the Baldwin Mansion, first built in 1661, and now home to a restaurant and two award-winning bars. Woburn has a thriving dining scene, with favorites like Pintxo Pincho Tapas and Ixtapa Mexican Restaurant in the city center, Strega Prime and Sichuan Garden in North Woburn, and family favorites such as Grill 110, Polcari’s, and Bickford’s Grille along Washington Street. There will also be restaurants in the newly redesigned Woburn Village, an open-air mall scheduled to be completed in 2021. HomeGoods, TJ Maxx, and HomeSense have already announced stores there, along with Market Basket. Other big-box stores such as Target, Kohl’s, and Lowe’s can be found here.

The beautiful Horn Pond conservation area is a popular area for recreation. There is a paved walkway around the majority of the pond, great for biking or walking/jogging, with many other trails leading off the main route. Horn Pond Mountain, also called Mt Towanda, is the highest point of the city and has great views back over the pond and across to Boston. Woburn Country Club, a 9-hole municipal public golf course, backs onto the pond, and the North Suburban YMCA is nearby offering fitness, swim, and sports classes for all ages.

Woburn is home to one of the oldest - and largest - Halloween Parades in New England. The last Sunday in October is Parade Sunday when up to 80,000 people line the streets to watch the floats in the Woburn Host Lions Parade. This is also a big homecoming weekend for the returning students. During the holidays the common across from City Hall is brightly decorated with a nativity scene, and during the Festival on the Common, the mayor will read “T’was The Night Before Christmas” before the lights are switched on.  During the summer months, outdoor movies are shown at Library Field and there are outdoor music concerts at Horn Pond.

Interested to know more about Woburn? Get in touch with one of our experienced agents. We can help you pinpoint the right neighborhood for your needs and guide you through the process of finding and securing your dream home!